For those of you who may not know about the origin of Daniel’s challenges, he experienced an intraventricular hemorrhage (bleeding in the brain) around his 32nd week in the womb which resulted in cerebral palsy. He is now ten years old, and is not able to stand or walk independently. He has had physical and occupational therapy since he was four months old. He has also had other types of therapy, such as speech therapy, horseback riding therapy and ABM (Anat Baniel Method) lessons, as well as sev 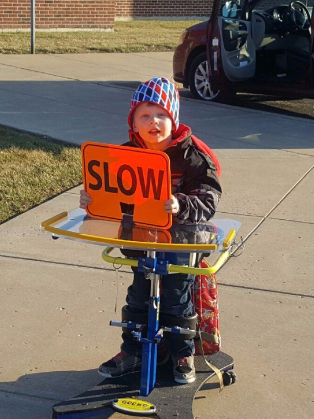 eral rounds of Botox injections to

help with the spasticity in his muscles.  In 2017 he had a surgery called a Selective Dorsal Rhizotomy which eliminated most of the spasticity in his legs. This has helped a lot with leg pain and being able to walk without crossing his feet. He uses a motorized wheelchair to get around at school and other places. He has a walker, but has often been resistant to walking, mostly because of his discomfort. We are working on increasing the amount of walking he does, and he has shown more motivation when he feels secure. He also uses a stander at school while he does some of his work, as bearing weight on his legs is very important for proper development. He was very excited to be on the safety patrol one afternoon at school – here is a picture of him in his stander.