An update on Daniel’s progress is long overdue! November was a bit more eventful than we would have liked with a complicated seizure event which landed us in the hospital for a few days. This was Daniel’s first seizure in over 14 months and was a big disappointment for us. A switch in seizure medicine was prompted by this event, but was something we had been considering for a while because of the behavioral side effects of the original medicine. The switch is a 9 week process of gradually ramping up the new medication and then gradually stepping off the original medicine. We have seen a lot of tiredness and complaints of not feeling well and a lot of difficult behavior during this process. In another three weeks Daniel should be completely switched over to the new medicine and we are hopeful that getting the first medicine out of his system will be helpful with some of his behavior challenges. 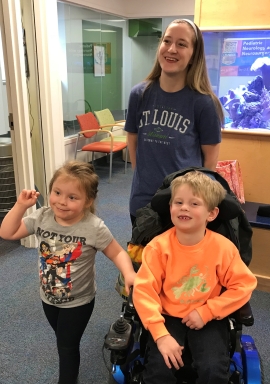 The week after Daniel’s seizure, we had his four month follow-up with Dr. Park, the surgeon who performed the SDR surgery in July. This was actually a fun time, because we were able to visit with people who had been in the hospital with us back in the summer. Kerry is an adult who is recovering from her surgery and doing so amazingly well. Daniel and Kerry had their physical therapy evaluations together and that was really fun. Lots of laughter and cheering one another on, as well as celebrating each others progress. Little Charlotte, also in the picture to the left was there for her pre-surgery evaluation and was waiting for her surgery a few days later. 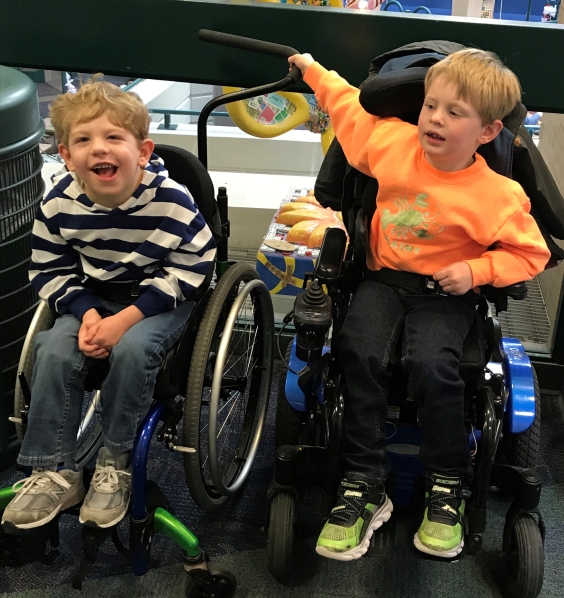 We also got to visit with Noah and his parents for a while at the hospital and met up for dinner a couple of days later.  There is a real camaraderie and understanding between the individuals and families who have gone through this fairly unusual process.

Dr. Park was comfortable with Daniel’s progress and was optimistic that Daniel will walk eventually. He encouraged us to push Daniel harder and make him walk more. We have often not pushed Daniel hard enough, and need to be more diligent and more deliberate in his exercising at home. This is a hard balance to strike, as Daniel is often tired, especially now with the medication change and with early morning therapy three days weekly. Sometimes it feels like a catch 22 as pushing him harder will yield greater endurance, but his fatigue at times makes it nearly impossible to push through a “workout” , so to speak. 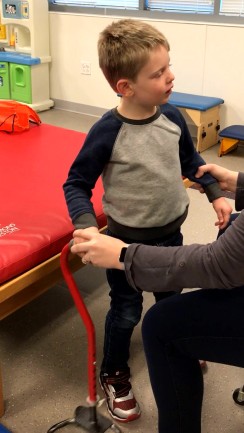 He is doing well, walking around 30 minutes during a therapy session and also working on standing with gradually increasing independence.

(I thought I had actually published this update in December, but clearly had not, so here we are in January.)

Daniel is doing very well. He is walking more and more with his walker and wants to take it places and walk at times instead of using the wheelchair. This is great progress for him.

We have completed the transition to the new seizure medication, though are still tweaking the dosage as Daniel has had a couple more seizures (one on Christmas Day, seemingly unrelated to anything, and one a few days ago which we now know was related to the onset of the flu.) Getting the old medication out of Daniel’s system has been such a blessing. It is known for its behavioral side effects, and we have seen a significant improvement in Daniel’s demeanor and conduct since he has been off it. We feel in some ways that we have our sweet boy back. He is not melting down as easily and is demonstrating real willingness to cooperate and is trying hard to pull himself out of it when he is very upset or disappointed about something. This is very encouraging to us. We were getting pretty discouraged and worn down by his behavior and seeing the change after getting off the medication is a big relief.